Attitudes of graduating Canadian urology residents on the job market: Is it getting better or are we just spinning our wheels?

Introduction: There has been increasing awareness of employment difficulties for physicians, especially surgeons, in Canada over the past few years. Our objective was to elucidate the attitudes and experiences of graduating Canadian urology residents in obtaining employment.

Methods: We surveyed four separate cohorts of graduating urology residents in 2010, 2011, 2016, and 2017. Responses from the 2010 and 2011 cohorts were combined and compared to the combined results of the 2016 and 2017 cohorts. Mean Likert responses were compared using unpaired t-tests. An agreement score was created for those responding with “strongly agree” and “agree” on the Likert scale.

Results: A total of 126 surveys were administered with a 100% response rate. The job market was rated as poor or very poor by 64.9% and 58.4% of graduates in 2010/2011 and 2016/2017, respectively (p=0.67). Lack of resources was identified as the biggest barrier to improved employment in both cohorts. Networking at meetings and staff urologists at their institution were the most important factors aiding employment identified by both cohorts. The ideal practice was academic or academically associated community practices in a large urban area, with 5‒10 partners for both cohorts.

Conclusions: The majority of graduating urology residents viewed the job market as poor or very poor and this did not change over a six-year period. It is unclear how much personal preference for location and practice type drove the somewhat negative outlook of employment opportunities, as the majority of residents were seeking large urban, academic, or academically associated community practices in competitive locations. 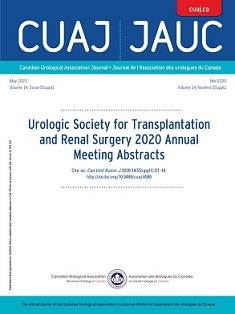 Obtain CPD Credit! CUAJ now provides readers with Section 3 credits of the Maintenance of Certification (self-assessment) program with the RCPSC. Read the accredited article, answer the multiple-choice questionnaire, and log the self-learning activity in your Royal College MAINPORT account.